The Queens Gambit. The rules of the game don’t change

If you recently watched The Queen’s Gambit, you may feel the lure of giving chess a crack, playing a game, and testing your abilities. But when you do for the first time, your first move cant be moving a pawn diagonally three positions.

In chess, there are rules governing what you can do, that all players adhere to. If you manage to find an opponent who will let you move a pawn diagonally three positions, well, chances are, you’re probably not playing chess!

Believe it or not, there are rules around equity markets too

From rules against insider trading and market manipulation to those requiring disclosure requirements, accounting procedures and mandated regular reporting! The rules and laws governing stock markets are designed to facilitate an orderly and fair market. Its main function is to facilitate the transfer of capital between participants who have differing opinions of a listed company’s fair value. The rules are generally the same for all participants and try to protect them from fraud and exploitation. But depending on your level of authority, they can be slightly different.

Think of them in terms of vehicle licences. A car licence only allows you to drive a car, not a Truck. A truck licence doesn’t permit you to drive a bus. Each type of licence represents a different level of skill & responsibility.

A company’s stock price theoretically reflects the intrinsic value at a particular point in time, including goodwill and potential prospects. Whether those prospects are next week, or in 5 to 10 years. The fluctuations in their last traded price, are investors negotiating what they think that fair value is.

Well, at least that was the case!

Fast forward to 2021, and We have Twitter, live streaming, zero brokerage trading platforms, message boards, all manner of technology. All in the palm of your hand by way of mobile devices. Available to anyone, anywhere, anytime (limited only by your service provider, right?).

And this is where orderly markets fall over…

It’s easy to illustrate this with a real-world example

GameStop (GME) is a brick-and-mortar retail store that sells PC games, consoles, accessories etc. The fact that they’re a retail store in the middle of a global pandemic gives you an idea that the company might be in a bit of trouble staying afloat, long term. The stock had increased from trading at $2.57 in 2020 to be range-bound between $12-17 at the start of 2021. There is nothing wrong with the balance sheet by all reports, but revenue is down a bit (around $63 million last quarter), and some argue that $12 to $17 is probably their current fair value.

A US hedge fund took another view. They thought a $17 value was inflated, and they took a short position*. Their position grew to more than 100% of the shares on issue. This article helps explain 1. Hedge funds are private investments that are only available to accredited investors. They are known for using higher risk investing strategies with the goal of achieving higher returns for their investors.

Early last year, members of a sub-Reddit board called “Wallstreeetbets” began commenting about GME. Some had taken positions when the company was ~$4, but community members were starting to feel that the price was being artificially suppressed. They believed that the hedge fund, representing billionaires and high net worth individuals, were artificially suppressing the value by opening more and more short positions.

Members of “Wallstreeetbets” began to buy, in spite of the hedge funds, which effectively squeezed their short position. If the stock went too high, the hedge fund would be forced to close out (cover) their position at a higher price and take a loss on the trade, while simultaneously driving up the price for investors/gamblers.

Fast forward to this week, where Game Stop (GME) traded as high as $482.

You may think this is terrific! If you had invested $50k into the company at $4 and sold out on the way up to $482, with an average sale price of, let’s say conservatively $220, you would have $2.75 million in your account! But we are still looking at a company that is fundamentally valued at $20. And for every seller, there is a buyer, and every buyer is a seller.

So some poor bastard, who jumped on the Crypto theory that prices only ever go up, who is trying to do the right thing by their family, potentially paid $220+ for each share! The median US take-home salary is $3261 a month2, or just over $150 per day. They have just worked around 1.5 days and exchanged it for one share in GME.

In the short run, the stock market is a voting machine, in the long run, it’s a weighing machine

No doubt with the recent volume traded, the registry of holders has completely changed, maybe changed a couple of times. So over the next 12 months, directors and CEOs caught up in this frenzy will have to front up at an Annual Generally Meeting (AGM) and explain to their new investors, many who may have paid through the nose, as to why the company’s realistic prospects reflect a $20 per share company rather than a $220. That’s if they can remain solvent through the pandemic.

It’s a little bit like paying the price of a Lamborghini, going to pick it up, taking a look under the bonnet, only to find that you actually own a Lada!

Here is what it looks in a chart.

Half of the chat looks like a flat line until you get to the explosive volatility. 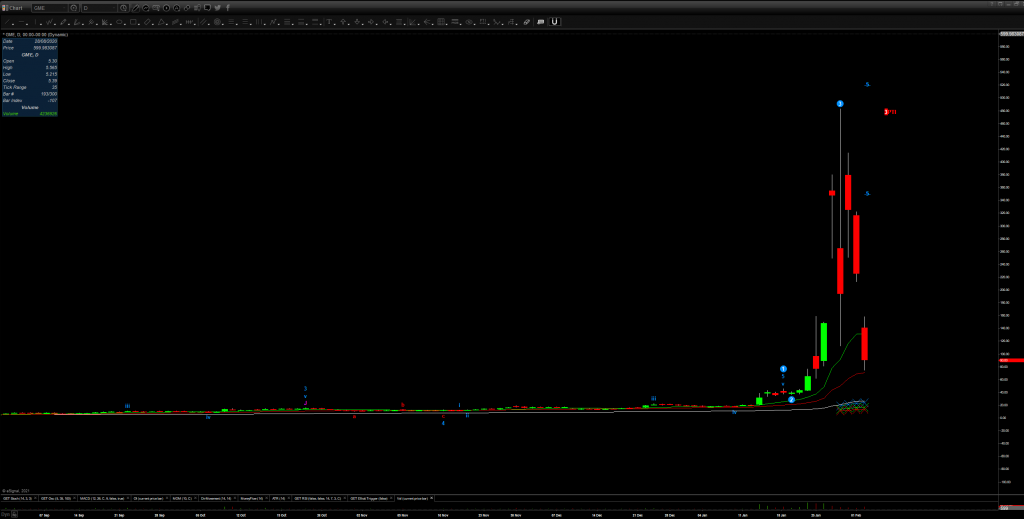 Footnote, a company that shares the same stock ticker symbol in the Australian Stock Exchange, GME Resources (GME), rallied from 0.075 to 0.12 the next trading day 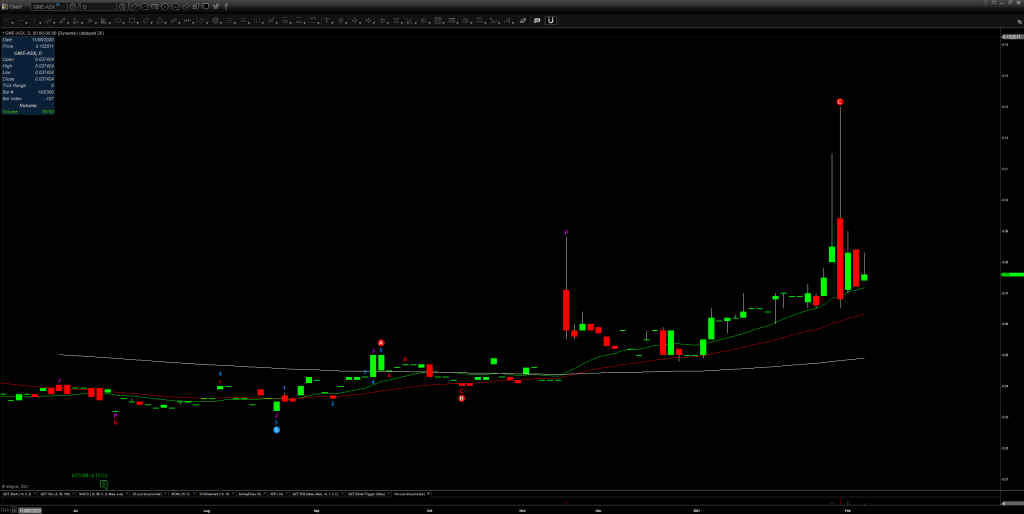 Dave Portnoy with his 2.1 million Twitter followers put out this tweet to rally the troops … (offensive language alert). According to Dave, stocks only ever go up, and he puts $1 million into NOK (Nokia) with no idea of what the company did. The result… 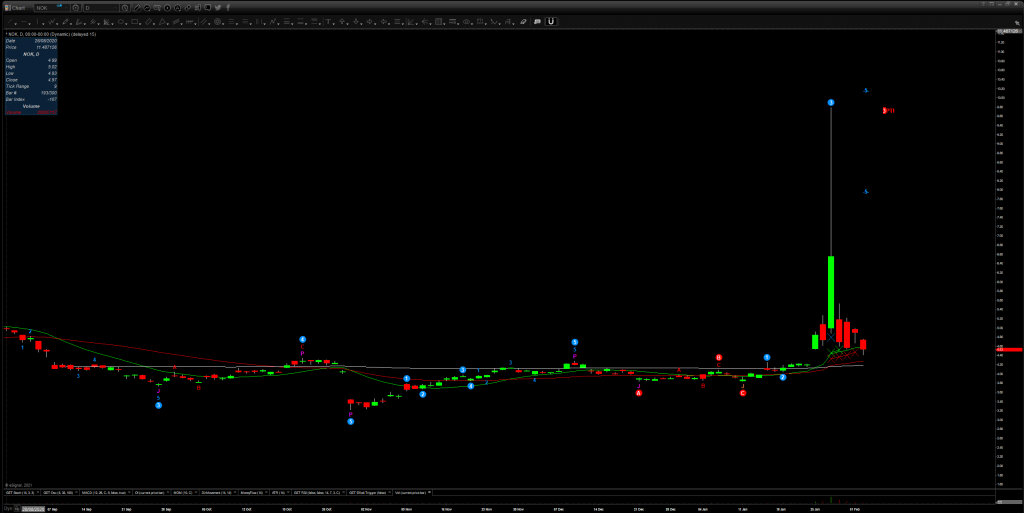 A company, previously valued at 0.60 cents skyrocketed to more than $70. The company was not the Signal App which Elon was referring to in his tweet! A day later, after the market had discovered the two companies were completely unrelated, the stock still traded between $55 and $20. The stock is currently trading around $4-$5, so there are a lot of people holding this company who bought in at $40 plus, who believe they have no option but to hold the stock until they can get out at breakeven! That’s called anchoring bias. 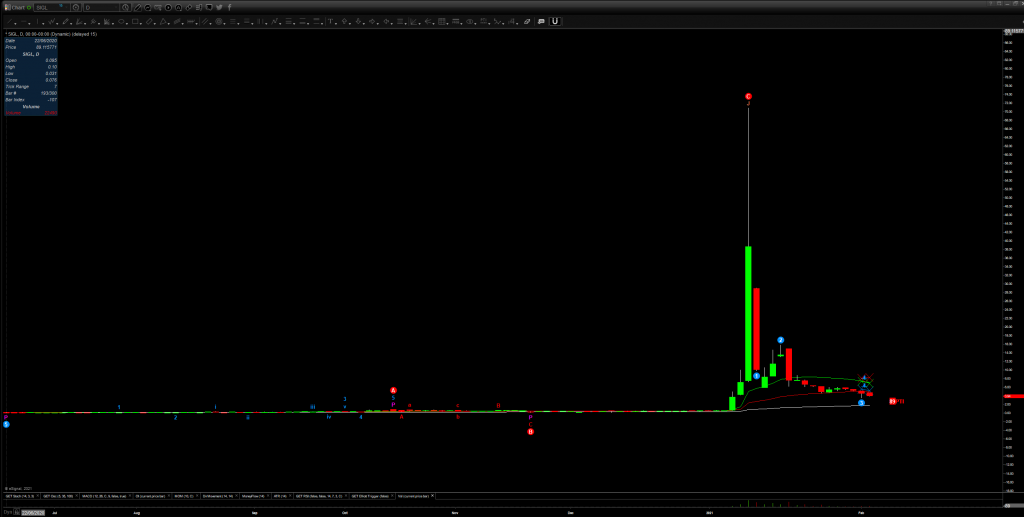 Just as I can’t move my pawn diagonally three spaces in chess, I can’t legally do my own electrical work or fit my own gas pipes. I can’t build a car in the garage and just drive it into the street, or hammer nails into timber to build a house. I need to be licensed, submit plans for approval or have my work inspection and sign-off by a qualified professional.

There are rules and regulations governing investments for a reason. Access to highly complex markets where livelihoods are on the line should not be available to retail investors who treat the Product Disclosure Statements like they are the latest terms and conditions from i-Tunes. You need to be aware of the downside. Robinhood, the free brokerage platform, suspended trading in a number of stocks last week and users lost their minds. Here is the one question you need to ask every single time in finance from Vinny Daniel in The Big Short.

Unless you can answer that, you should not be dipping your toes into the water

Exchanges around the world have opened markets up so that everyone has access, and they collect a nice fee for everyone who places a trade so there is plenty of incentive for them to provide access. But you can’t rock up to the MCG on Boxing Day to watch Australia play India and expect to be opening the batting with the sun at your back, unless you’re a professional player who’s earned the right to wear the baggy green.

What have we learned?

Do not do this on your own! You may think it looks easy and you are hearing plenty of stories about how people have made a million, but finance and investing can be risky and complex. There is legislation to know, market psychology to comprehend, accounting practices and economic principles to understand and politics to navigate. There are emotions to keep in check, plus the time required to dedicate to research and monitoring the market. All while playing a supercomputer that is trading in the blink of an eye, while instantly monitoring every resource of company information. There is too much on the line, to frivolously and blindly follow some idiot on Reddit, Twitter or Youtube.

*Its called a short position because they generally don’t have (or are short) the stock they are selling. Often it’s borrowed and they pay a fee for each day that its outstanding. But there are lots of ways to short a stock. They profit if the stock falls and they can buy it back at a lower price and close out their position. It is the reverse of traditional buy and hold strategies. But if the stock goes up, they have to close the position and will make a loss.

The information contained in the ‘Surf Coast Wealth Management’ Blog page, including any information in relation to taxation, is of a general nature only and does not take into account the objectives, financial situation or needs of any particular person.

You should refrain from doing anything in reliance on this information without first obtaining suitable professional advice. You should also consider the appropriate Product Disclosure Statement (PDS) before making any decision to acquire a product.